By Samara on April 18, 2021
The Samara Team is ecstatic to announce the first sighting of leopard on the reserve in 24 years.

We have long known that leopard exist on and around Samara, having seen the occasional track and other signs of these elusive cats over the years. In 2014, we captured a photograph of a leopard in a camera trap, and Master Tracker Pokkie Benadie had found tracks of a large male in the hidden kloofs of the reserve over the past few months. Yet, until now, nobody had managed to catch a glimpse of the creature itself.

Leopards are by nature secretive animals, stealthy, solitary and adapted to a variety of harsh terrains. Unrestricted by electric fences, leopards can and do roam far outside of protected areas and even into urban fringes. Long persecuted by farmers who fear them preying on their livestock, leopard densities have decreased in the Camdeboo region of the Karoo. A newspaper cutting from 1906 describes how in the space of just a few years, nine leopards were captured at the farm Apieskloof, present-day Karoo Lodge. Today, the sight of just one leopard is cause for celebration.

Tracker Jason Williams and field guide Benedict Phepheng were the lucky pair to make Samara leopard history. They spotted a large, relaxed male leopard sunning himself on a flat, exposed rock in Wolwekloof, the valley that contains the winding road up to the Samara Mara plateau grasslands.

I have always had dreams of seeing leopard in Wolwekloof. Sometimes I will dream that I am being chased by a leopard whilst looking for cheetahs in Rocky Ridge valley. I never thought my dream would come true, but they say that if you believe in your dreams, your dreams will always come true. That is what I realised on 13th April 2021.

It had been a long and stressful day of two flat tyres, waiting almost two hours for a recovery vehicle in the middle of the day with very little shade for my guests, and our elephant bull Kahle in musth showing us his dominance.

Having very bubbly guests on my vehicle made it easier for me as all of us just enjoyed our time together. What was to come after a long 5-hour safari made it feel like our day was just starting. To this day I still feel like if I could just turn back the hands of time and repeat that moment, I would appreciate it very much.

As we came down the steep Wolvekloof mountain pass, I was telling my guests about Spekboom. All of a sudden Jason my tracker, who was sitting on the tracker seat, started banging on the bonnet of the vehicle for me to stop. He asked me “Can you see what that is?” At first I thought it was a rock. But with careful sharp eyes I saw the beautiful rosette spots and the bulky body and that is when I realised my dream of seeing a leopard on Samara had come true. Pure joy overcame me and Jason. It seemed like Jason could actually run after it and try to catch it! He had jumped off his seat and was dancing in front of the vehicle. It has always been both our dream to be the first guide and tracker team to spot a leopard on Samara and to make it even more special, it should be with guests.

My guests were astonished as both Jason and I forgot that we had passengers on our vehicle. The moment we saw the leopard joy overtook us and we could not stop talking about our leopard that we had spotted. The worst was that with all the excitement taking place I forgot the most important thing… “taking a picture”…! That is the most important thing in Samara for a special sighting as the team always believes in having photographic evidence but luckily I had my guests that witnessed all the excitement with us. It was a privilege to share that special moment with them.

Today I still have that image of the leopard looking at us and the moment it realised it was spotted. It just stood up and walked away into the bushes, probably telling us “you have found me, and you will still see more of me to come”. 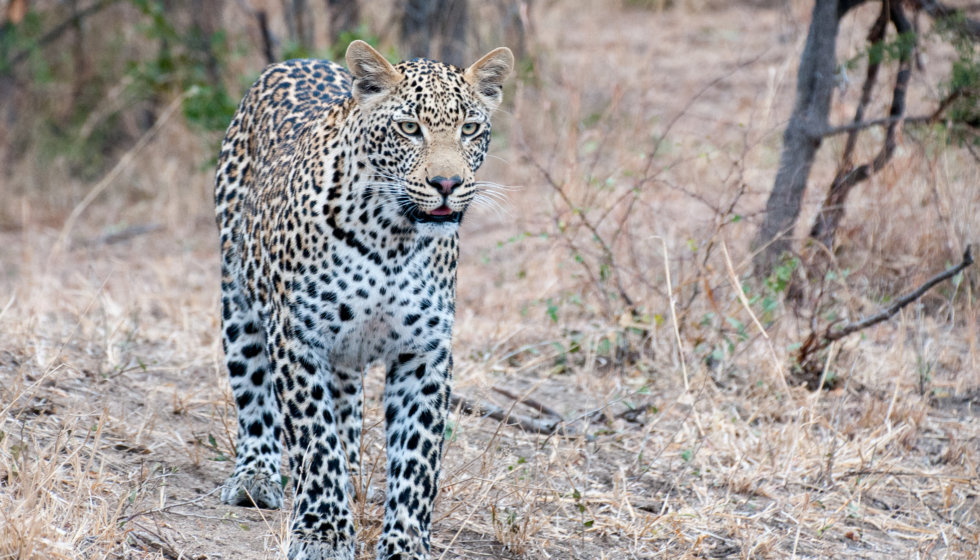 Six months after his first appearance, the leopard finally showed his spots again! As they say, proof is in the pudding, and so we were delighted that our camera traps set up in Wolvekloof captured several images of the male leopard.

Samara guide and conservation ambassador Ewert Hauptfleisch explains: “We have been running a leopard camera trap survey for more than a year, and tens of thousands of baboon and monkey photos later, we finally have photographic proof of this leopard and his movements. After first sighting him in April, followed by spotting his tracks in September, it seems he’s returning to home base – a testament to Samara’s rewilding efforts. The return of biodiversity to an ecosystem of its own accord is a sign of its healing. The excitement within the team is tangible!” 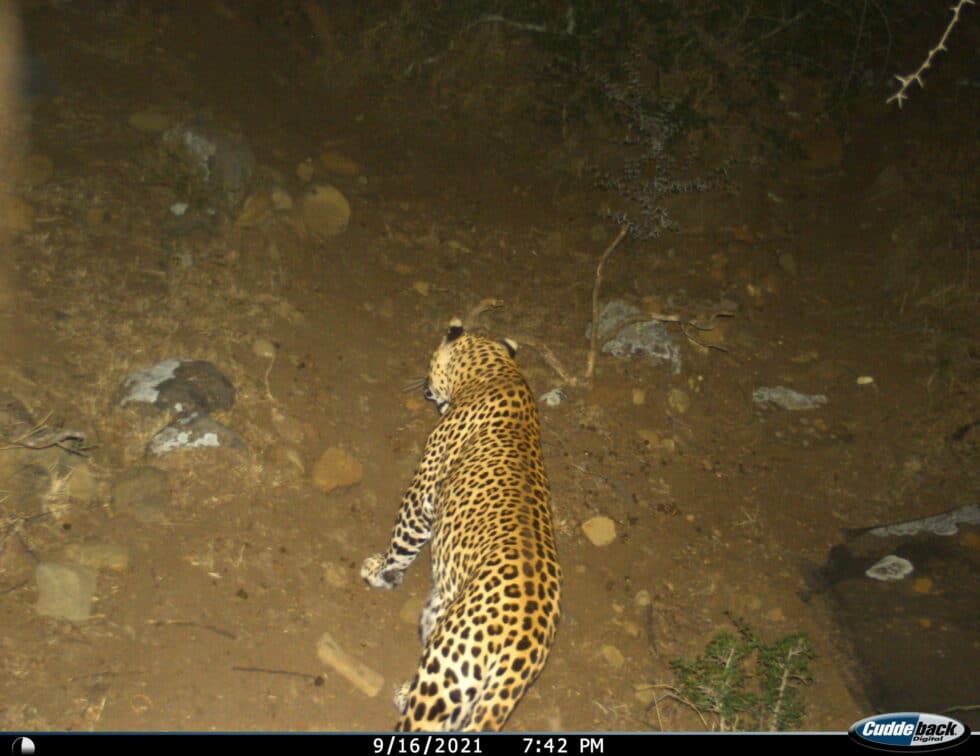 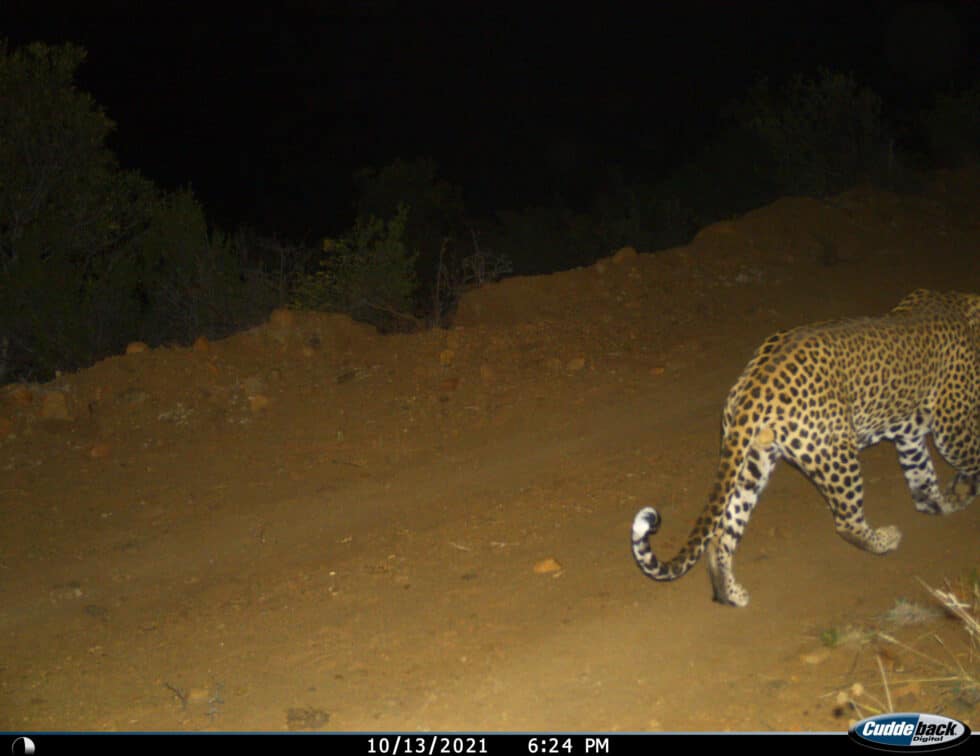 WOWeeeeee!! What a lucky and awesome sighting for Benedict, Jason and their guests! A rare sighting indeed. If this is his chosen territory, let’s hope you and visitors to your beautiful reserve get to see him more often. xGina

How very very special, may you have many more sightings of this glorious cat

That’s tremendous – wouldn’t it be great to get a female and cubs!

That is so exciting – lets hope some of its relatives also arrive !

Hi Sarah
I’m thrilled to hear your news about the leopard sighting
I knew that they would return in time. So glad after the history.