Cheers to our cheetahs!

By Samara on May 26, 2020
Is there anything more adorable than a baby cheetah? It’s hard to imagine that these little balls of fluff will one day grow into ruthlessly efficient hunters – but that’s exactly what’s in store for the two litters we’ve recently welcomed at Samara Private Game Reserve.

We found the first litter, belonging to female Inara (formerly known as ‘75’), on top of the Samara Mara last month. At around seven weeks of age, they’re already displaying the inquisitiveness cats are famous for – they were highly curious about us, showing absolutely no fear.

The half-siblings with whom they share a father, Sam, are living a little lower down the slopes of the mountain. This litter of five is particularly special to Samara, because they are the offspring of Chilli, the last daughter of the legendary Sibella.

The five-week-old cubs are her third litter, and they’re still very much dependent on her. Because they’re still suckling, Chilli hides them in dense bush when she goes hunting, leaving them only for short periods of time. Although they’re mobile, they’re still stumbling over rocks and disappearing in the long grass. They’ll start to become more agile and active from about four to five months, when they start to hone their hunting skills through games like climbing trees or playing with their mother’s tail while she walks. 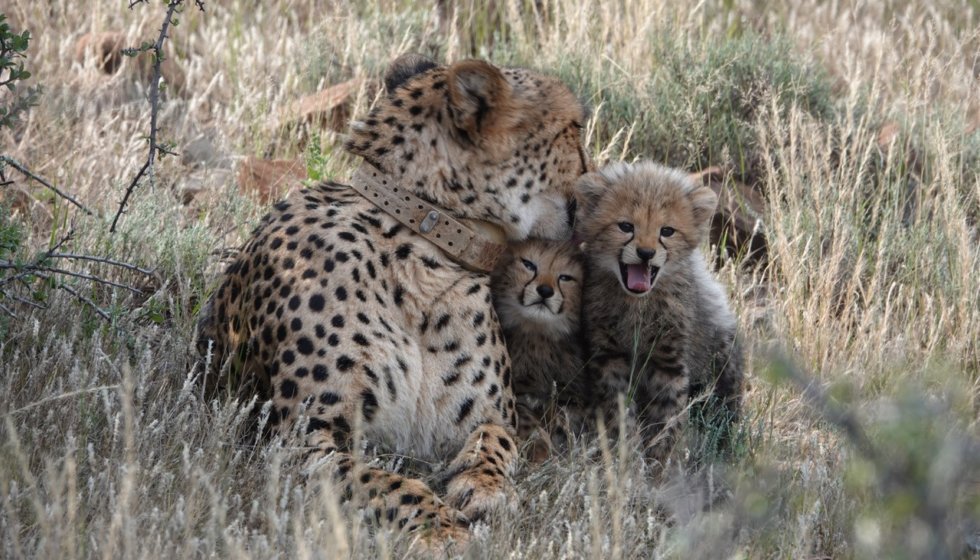 Of course, it’s only when they’re around 11 months old that their prowess will have developed to the point where they’re able to bring down an animal like a springbok lamb, although Chilli will start allowing them to join in the hunt from around six months.

Although both his litters of cubs are camping out on his favourite mountain, Sam isn’t paying much attention to either of them. That’s because there is very little paternal involvement when it comes to raising cheetahs – the kindest thing you can say about a cheetah dad is that, because he’s not threatened by his cubs, he won’t try to kill them!

That’s not to say they don’t face other dangers. At this point in their lives, cheetahs are a target for lions, jackals and baboons. Because of predators like these, very few cheetah cubs actually make it to adulthood – although, by the time they’re completely independent (usually by 20 months), they’re able to hold their own.

We are particularly delighted at how our cheetah population is growing (even in lockdown!), and we continue to work with Vincent van der Merwe of the Endangered Wildlife Trust on the all-important cheetah metapopulation programme. The project’s aim is to safeguard the future of this endangered species, primarily through translocations to prevent inbreeding, which weakens cheetah genetics, and through the establishment of new cheetah populations.

Last year we sent one of our male cheetah to Roggekloof in the Northern Cape for an historic translocation as the species returned to the area for the first time in over 100 years. We also participated in the translocation of cheetah to Majete Wildlife Reserve in Malawi to restore the species where it had gone locally extinct, and just a few weeks ago we relocated Chilli’s offspring from her second litter, now independent young adults, to reserves in Kwa-Zulu Natal which required new cheetah bloodlines.

According to Vincent, “Samara is one of the most successful cheetah reserves in South Africa”, and with the birth of these two recent litters, this looks set to continue!