By Samara on February 12, 2021
These small hyaena-esque creatures are a rare sight on safari due to their secretive and nocturnal nature. In this blog, you’ll learn much of what science tells us about this little-known species.

1. They’re not actually wolves at all

Aardwolves (Afrikaans for “earth wolves”) are not actually wolves. In fact, they are part of the hyaena family. That hasn’t stopped them from gaining a variety of less-than-accurate designations though. For example, they are nicknamed “maanhaar jackals” for their characteristic mane which grows from head to tail. This mane is an important defense mechanism, as it stands on end when the animal feels threatened, making it look twice as big as it really is.

This is just as well, because aardwolves have undeveloped teeth, quite unlike your typical wolf! This is one of the reasons that they keep their mouths closed when confronted with danger, so that any predator does not see how woefully ill-equipped they are.

The aardwolf’s mane is also referenced in its scientific name, Proteles cristata, where “cristata” translates as “provided with a comb”. Its genus name, “proletes”, is interesting too: it means “complete in front”, a comment on the fact that their back paws have only four toes while their front paws have five. 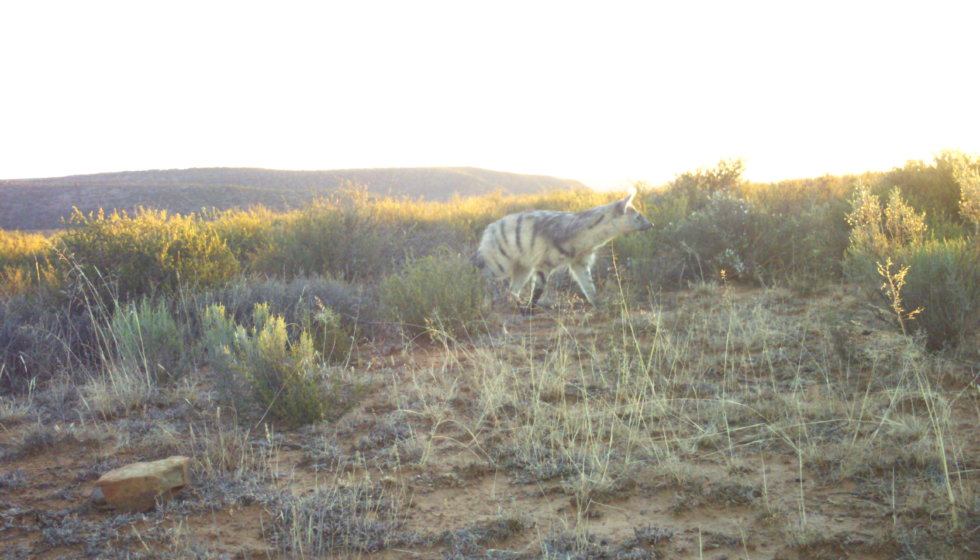 Although aardwolves are territorial animals, breeding pairs will mate for life. The males are modern dads: they also help in raising the cubs, of which are born after a gestation period of 90 days. The babies spend the first month of their lives inside their dens, with their fathers standing guard. They’ll start participating in the nightly food forage when they’re around four months old, and set off to start their own independent lives after about one year.

We recently spotted an aardwolf den on the Rooiplaat section of the Samara Mara and set up a camera trap – take a look at the Instagram video below.

Unlike their spotted hyaena and brown hyaena cousins, who will hunt as well as scavenge, the aardwolf isn’t into carrion. When they are seen sniffing around a carcass, it is not because they’re interested in picking the bones but rather because they’re foraging for insect larvae.

Aardwolves are predominantly termite eaters and can consume up to 200,000 at a time – almost 1kg. While most animals with this diet – like the aardvark – use their claws to dig up their small prey, the aardwolf relies on its long, sticky tongue to pick up termites from the ground.

5. They can struggle in winter

Winter can be a tough time for aardwolves as termites populations become scarce and less active. With their diet diminished, aardwolves have been known to drop as much as a quarter of their body weight during this season. They also battle with the cold temperatures, particularly at night when the mercury can drop below freezing in areas like the Karoo. As a result of these two pressures, in the winter months the usually-nocturnal aardwolf may emerge to forage during the day – increasing the likelihood of satisfying their hunger and regulating their body temperature.