The striped polecat (Ictonyx striatus, also called the African polecat and African skunk) It lives predominantly in dry and arid climates, such as the savannahs and open country of Central, Southern, and sub-Saharan Africa. Striped polecats are about 60–70 cm (24–28 in) in length, including their tails, and 10–15 cm tall to the shoulders. Generally they are black on the underside, white on the tail, with stripes running from their heads down their backs and on their cheeks. The legs and feet are black. Their skulls are usually around 56 mm (2.2 in) long, and they have unique face mask coloring, often including a white spot on their head, and white ears. These masks are thought to serve as warnings to potential predators or other antagonists. Like other mustelids, the striped polecat is a carnivore. It has 34 sharp teeth which are optimal for shearing flesh and grinding meat. Its diet includes various small rodents, snakes, birds, amphibians, and insects. Due to their small stomachs, they must eat often, and have clawed paws to help them dig around in the dirt in pursuit of their next meal.

The striped polecat is a solitary creature, often only associating with other members of its species in small family groups or for the purpose of breeding. It is nocturnal, hunting mostly at night. During the day it will burrow into the brush or sleep in the burrows of other animals. Most often striped polecats are found in habitats with large ungulate populations, because of the lower level of shrub that often accompanies the presence of these grazers.

After conception, the gestation period for a striped polecat is about four weeks. During this time the mother prepares a nest for her offspring. The newborn polecats will be completely vulnerable; they are born blind, deaf, and naked. Around one to five offspring are born per litter in the summer season. Up to six can be supported at one time due to the fact that the mother has six teats.The mother will protect her young until they are able to survive on their own. 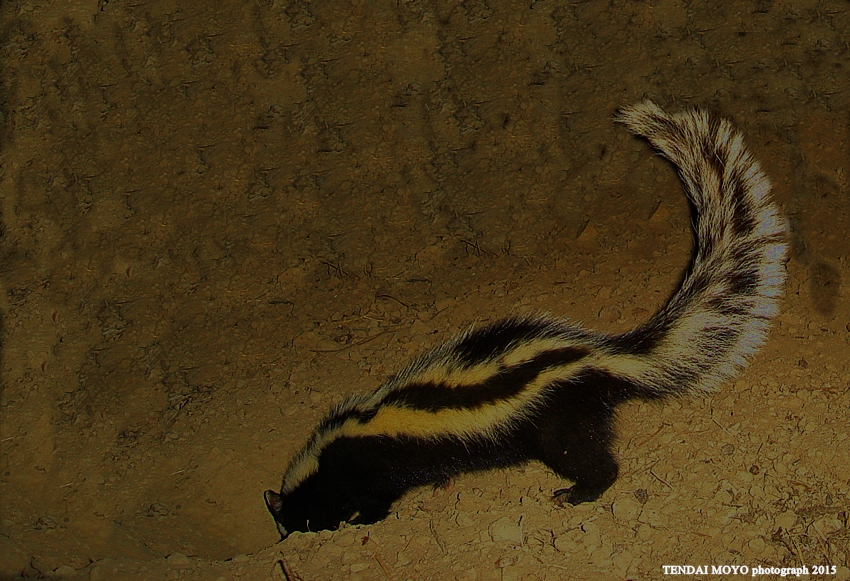