By Samara on September 29, 2020
The 2020 Heritage Day Cup could not go ahead due to COVID-19, so this year we replaced the sports tournament with a celebration of the written word and a feeding scheme in Graaff-Reinet's communities most severely impacted by the pandemic.

In 2018, Samara launched the Heritage Day Sports Tournament to provide local youth in Graaff-Reinet with opportunities to find purpose through sport. Heritage Day, celebrated every year in South Africa on 24th September, is a celebration of our country’s rich culture in all its forms: from languages to customs, natural beauty to art, literature to music, with a focus on finding strength in diversity. The day has been extended to an entire Heritage Month throughout September dedicated to promoting South Africans’ shared national identity.

In the spirit of that particularly South African value of Ubuntu – “I am because you are” – the Heritage Day Sports Tournament provides a platform for young people in under-served communities to envision and shape their future. The slogan for the tournament, Masibabanye yeyethu sonke – “Let us be one for all” – encapsulates the spirit of the initiative, based on inclusivity, hope and opportunity.

We had big ambitions for building on 2019’s event for this year, until the COVID-19 pandemic and associated government regulations made an in-person sports tournament impossible. That didn’t deter Anneley Gradwell, Samara’s Community Liaison Officer. One thing was clear – we had to do something, especially in the circumstances. The government lockdown has had a devastating effect on the Karoo’s poorest communities, particularly those that were already struggling before the pandemic. Many local people survive on casual work in small towns or neighbouring farms, but as work dried up and layoffs multiplied, the situation fast deteriorated. On the whole, virus infection rates have been low; it is hunger and starvation that have become the real killers.

After discussions and consultations between Samara and our community partners, it was decided that the most impactful alternative would be a stew kitchen (a variant on a soup kitchen) in some of Graaff-Reinet’s most underprivileged communities. Anneley, General Manager Marnus Ochse and the rest of the Samara team set about making preparations for the event. Over 5 days leading up to Heritage Day, the Samara team, assisted by community leaders and SANParks staff from the Camdeboo National Park, fed 1,560 community members in 5 municipal wards. More than two-thirds of those fed were children. Each person received a large portion of venison and vegetable stew with samp (roughly crushed corn kernels) and a piece of fruit.

And as for the children and youth who would have participated in the football and netball tournaments, their creativity and drive was called upon once more, but this time in a celebration of the written word. Aspiring writers and poets from Graaff-Reinet and surrounds were invited to write a poem or short story of no more than 500 words with the theme “Hope in difficult times”, with food vouchers as prizes. Entries could be written in Afrikaans, isiXhosa or English, with four age categories (under 13s, 13-16 years, 17-20 years and over 20s). The winning entries will be published in The Graaff-Reinet Advertiser on 22nd October. 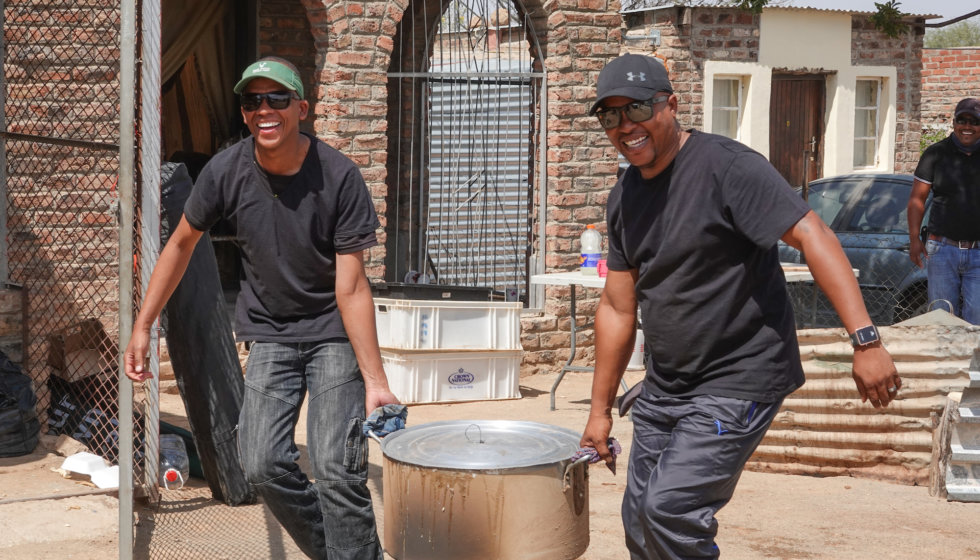 Samara Private Game Reserve would like to thank the ward councillors (Ward 3 – Kattie Hoffman; Ward 4 – Xolile Galada; Ward 5 – Glenda Mackelina; Ward 6 – Thembile Tshona; Ward 14 – Joy Williams) for assistance with the logistics of the stew kitchens. Thank you to SANParks for providing cooking wood, gas, gas stoves, pots and tables for the food distribution. In particular, thank you to the following SANParks employees who assisted on the ground: Allister Sylvester, Demitri Williams, Sinatemba Blouw, Vuyo Mbulawa, Alban Booysen, Lobobalo Boto and Rosemary Scheepers. Thank you to the helpers from the community who cleaned the cooking equipment and tended the cooking fires. Thank you also to the Samara Team, specifically Anneley Gradwell, Riaan Swemmer, Dudley Gradwell and also Ivan Marlouw, for coordinating and running the event, and to Kim Budge for her ongoing support.