Getting to know Samara

We’ve done quite a few things this last week and I can’t believe it’s only been a few days! Earlier in the week, we took a trip to a nearby town, Nieu-Bethesda. It’s very small and only has dirt roads, making it seem as though it got stuck in a time before tar roads. It was definitely not like any other town I’ve ever seen. There we learned about animals that lived in the Karoo even before dinosaurs and saw some fossils in the river bed. It was quite fascinating to see the traces of what lived here before. 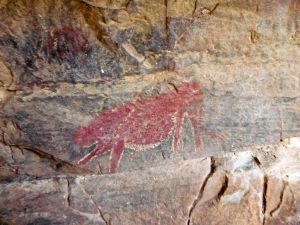 In a bit of a continuation of the history “theme”, we hiked up to a cave the next day, near Mountain Retreat on Samara, joined by the guys from the Tracker Academy. Hundreds of years ago, the cave was a common place to stay for the San and Khoikhoi people of the Karoo before they continued to their next location. In the cave, there are several paintings, including one of a cheetah or female lion surrounded by a few people, and some of animals that appear to be elephants and giraffes. It was a surreal experience to see where these people used to live and I must say, it is a nice place to live. A fantastic view of the valley below it, a small stream nearby, and a cliff above it that gives it somewhat of a “rooftop balcony.”

We got to spend some time with the Vervet monkey researchers on Samara and learn about what they do and what the monkeys are like. I learned a lot about how the Vervets interact with each other, their diets, and their habits. It was so neat to be able to get so close to the animals without them being disturbed and to have them approach us with curiosity before they scampered away into a tree. 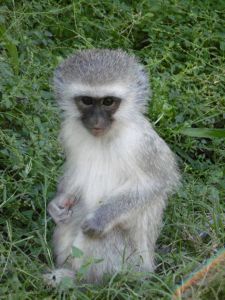