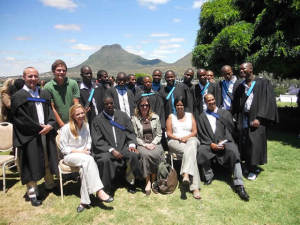 The 18 November 2011 was a very important date as sixteen young men, the first graduates of the Tracker Academy, a training division of the College situated at Samara, received their certificates of graduation.  The Tracker Academy was established in 2010 with the view of providing training in the art of tracking animals in the wild, an indigenous skill in the process of becoming lost for future generation.
Ms. Caroline Rupert, a board member of the College, announced the Top Tracker Students of the Year and Innocent Ngwenya and Busani Mtshalito received their prize money donated by Mrs. Sal Roux.
Ms. Jo-Ann Strauss, millennium Miss South Arica, popular TV personality, a business woman in her own right and a firm favorite among the young tracker graduates, brought the day’s proceedings to a close wishing the graduates well for the future.
A special touch was added to the evening’s proceedings when the Gugulethu Tenors of Cape Town who entertained the dinner guests during the course of the evening,surprised Mrs. Sarah Tompkins with a beautiful rendition of the traditional birthday song while a young graduate of the next day brought in a sparkling cake baked and decorated by her and her fellow graduates. Sarah Tompkins, of Samara Private Game Reserve in the Graaff-Reinet district, is a major supporter of the Tracker Academy, making accommodation and training facilities available to the students and trainers of the Academy and allowing them full traversing right of the Samara land for training purposes.