History of the Great Karoo

Samara’s corner of the Great Karoo is a land of immense historical significance, of age old cultures, intrepid explorers, colourful pioneers and eccentric characters. Ancient Stone Age sites with evidence of tools and weapons have been found in the floodplains of the Melk and Apies Rivers. One of the last Stone Age peoples, the Bushmen, inhabited Samara’s craggy hills until the late 19th century. Nomadic huntergatherers, they made their homes under rocky outcrops and in sheltered valleys, often with extraordinary views of the landscapes they called their own. One such shelter has been found on Samara, with beautiful rock art dating back thousands of years. Uniquely, these Bushman paintings depict the only known painting of a cheetah – fitting when one considers Samara’s cheetah conservation success.
These tiny Bushmen had an uneasy relationship with the Trekboers who left the Cape in the 1750s to find new pastures in which to settle away from colonial control.

Whilst the Khoi Khoi, themselves semi-nomadic pastoralists, responded willingly to brandy and tobacco to become the Trekboers’ servants and herdsmen, the Bushmen were not subdued that easily. For close on 100 years they waged a guerilla war against the Dutch settlers, stealing livestock and raiding farms, until eventually European firepower overcame them. Fragmented and harried, the few remaining Bushmen enclaves retreated to the remote expanses of the Kalahari further north. Throughout the 18th and 19th centuries, European explorers set out to discover more about this ‘Place of Great Dryness’. Sent on reconnaissance missions by authorities in the Cape, many colourful characters passed through the Karoo, mostly hugging the more temperate mountain ranges rather than braving the hostile flat plains. Francois Le Vaillant, a young French ornithologist, camped on the southern section of Samara, by the Plaat River. Somewhat of an eccentric, he journeyed with a tame baboon called Kees, who acted as companion and ‘taster’ of all unknown foods. He also owned a cockerel which served as his alarm clock. Every evening without fail, he would dress up in his finest gear, lay out all his silver, and consume a four-course dinner by candlelight. His travel journals recount tales of vast herds of game, of leopards, black rhinos and buffalo. So huge and so numerous were the infamous Cape lion that he dared not travel with his oxwagon at night.

The famous David Livingstone also meandered through this corner of the Karoo, describing Graaff-Reinet, our local town, as ‘the prettiest little town in all Africa’. Dubbed ‘the gem of the Karoo’ by other early travelers, Graaff-Reinet is South Africa’s 4th oldest town, founded in 1786 by the Governor of the Cape Colony, Cornelis Jacobus van der Graaff, whose wife’s maiden name was Reinet. Initially a trading outpost, in 1795 it was declared a republic, the first in South Africa, by its fiercely independent and self-reliant citizens, in defiance of the colonial rulers in Cape Town. The republic exchanged hands between the Dutch and the British several times, until the Great Trek of 1835-1846. Some of the most famous leaders of this journey, which had significant ramifications in South African history, lived in Graaff-Reinet. Andries Pretorius, who commanded the Boer forces against the Zulus at the Battle of Blood River, owned the title deeds to Fonteinplaas, one of the 11 farms that constitutes Samara. He later became the first President of the South African Republic, and the country’s capital, Pretoria, is named after him.

During the Anglo-Boer War of 1899-1902, the area around Samara and Graaff-Reinet witnessed several skirmishes, as British military operations for the entire Eastern Cape were centred in the town. Further up the Petersburg Valley, a few kilometres east of Samara, lies the site where the pivotal Battle of Groenkloof was fought, during which the famous Boer Commander Johannes Lotter was finally captured by the Coldstream Guards. And many more fascinating characters lived here!

During the Second World War, a German spy eked out an existence on top of Kondoa Mountain on Samara, reporting back to HQ on the movements of the British across the Plains of Camdeboo using a secret radio concealed in a hollowed-out wall. Olive Schreiner, famous author of The Story of an African Farm , set in the Karoo, lived in nearby Cradock. Eve Palmer, who wrote South African literary classic The Plains of Camdeboo in 1966, grew up on the Karoo farm of Cranemere, which shares a boundary with Samara. It is the stories of these celebrated individuals, as well as those of the countless unnamed families who have endured the harsh conditions of the region for centuries, that weave such a rich tapestry of historical experience in this special part of the Karoo. 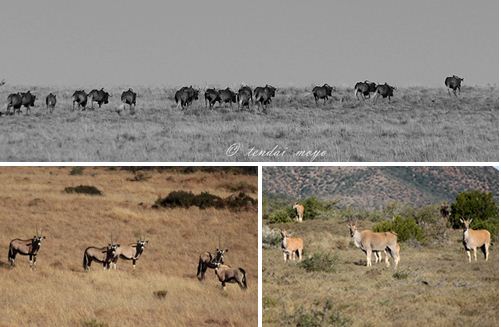