African safaris have become synonymous with the Big Five – Lion, Elephant, Black Rhino, Cape Buffalo and Leopard – the collection of animals deemed most desirable to spot on a game drive. However, as explained in our last blog post, the Big Five concept has many limitations, not least the fact that the term originates from the old hunting tradition as the most dangerous animals to hunt on foot.

So does this antiquated term really have any place in modern ecotourism? We think not, and especially not when it comes to child-friendly safari destinations. Our society desperately needs to raise a generation of children who care about and understand nature in all its shapes and forms. And in our experience as a family business catering to kids of all ages, one of the best ways to engage children is through humour. So we thought we’d try something a little different…

The Funny Five have been chosen for their quirky disposition, unusual looks and sometimes hilarious behaviour. We have made sure to pick animals whose nature, diet and habits pose a minimal amount of danger in approaching and tracking them on foot (always with trained guides), so that kids can have a safe and enjoyable safari experience. We have also chosen species that live across sub-Saharan Africa, so as not to restrict the list to specific wildlife found only at Samara or in the Karoo.

So without further ado, let us present to you… the Funny Five! Watch the video here.

The giraffe is an obvious inclusion in our list. Despite their odd shape, unlike that of any other animal except perhaps the okapi, giraffes have a distinctive beauty, with long eyelashes and a graceful slow-motion run. According to recent research, there are four separate species across Africa, and they all exhibit funny behaviour: from occasionally chewing bones for calcium to fighting by throwing their weight behind their long necks, not to mention the way they feed with their 45-50 cm prehensile tongue.

Samara is home to the Southern Giraffe, which can be seen on the reserve in groups of up to 30 individuals. These curious and fascinating creatures are wonderfully calm and can be approached on foot to within a comfortable distance – all the better to admire them from!

From a beauty to a beast – the warthog isn’t known for its good looks. But what a funny creature it can be! Affectionately known as Pumba for its cameo in The Lion King, the warthog is beloved by people the world over as an African icon. When running, an automatic reflex causes a warthog’s tail to stand straight up, a hairy tuft on the end waving like a beacon, which allows piglets to follow their mother through the long grass.

The wildebeest, so the story goes, is made from the leftover parts that remained after God had created all the other animals. First, God created beauty – the zebra. Then, he created power – the lion. Once he had created all living things, he found that some parts remained – a pair of horns here, a tail there. Sensibly, he did not want to waste them, and so it was that the wildebeest came to be. Wildebeest are certainly strange-looking animals, and their behaviour can sometimes appear quite inexplicable. 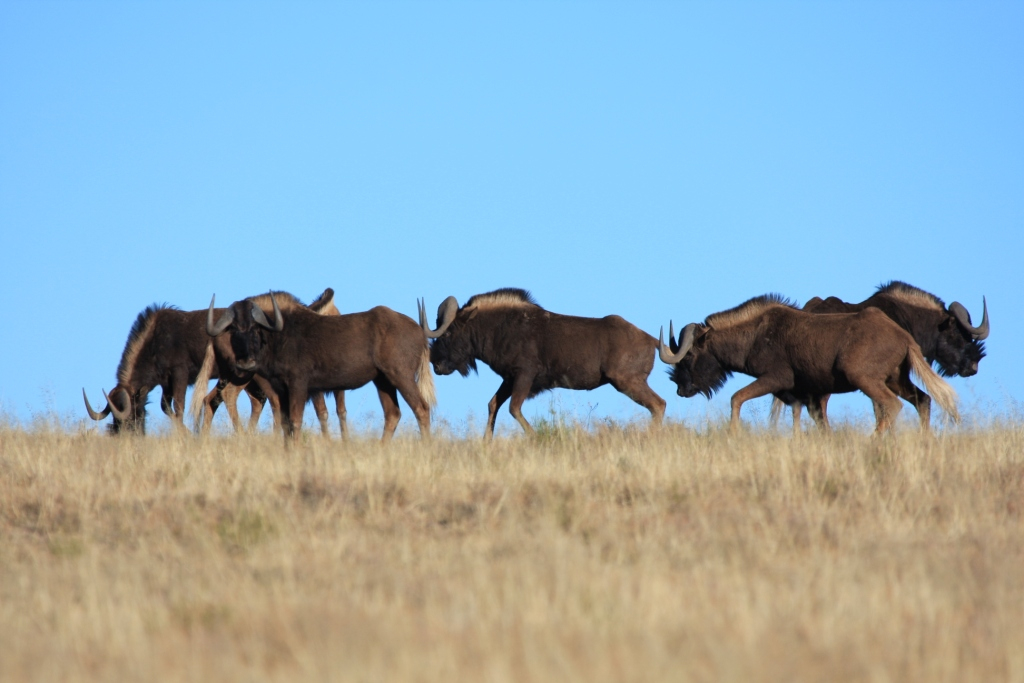 The Black Wildebeest that lives in Samara’s plateau grassland – the ‘Samara Mara’ – is prone to galloping around in circles, bucking and kicking and speeding off quite purposefully in one direction, only to turn on a dime within seconds and race directly back from whence it came.

With their human-like habits and idiosyncrasies, monkeys can provide hours of entertainment to even the most experienced safari-goer. Incredibly agile and very intelligent, they have learnt to adapt to countless environments around the world – from the Rhesus macaque in the cities of India to the Snow monkeys that dip into northern Japan’s hot springs.

Samara boasts one of the highest densities of Vervet Monkeys in Africa – with troops reaching over 70 individuals, an astonishing number for a semi-desert area. Thanks to a long-running research programme with the University of Alberta and the University of Wisconsin-Madison, among others, Samara guests can witness the social dynamics of wild monkey troops up close. Care is taken to ensure that the three troops under study do not associate humans with food, so that the interactions between the monkeys and their environment can be as natural as possible.

Really, have you ever seen a funnier beast? Dubbed ‘the strangest creature in Africa’, the aardvark combines the ears of a donkey, tail of a kangaroo and snout of a pig with a 40 cm tongue and sharp claws. Despite being prevalent across the continent, the nocturnal aardvark is one of Africa’s most elusive animals, and tops many a safari bucketlist.

At Samara, we are fortunate to get great aardvark sightings during the day in winter, as they emerge from their burrows in pursuit of ants and termites who are more active during the warmer daylight hours. This allows for incredible sightings on foot. We even have a dedicated aardvark tracker, Given Mbetse, a graduate of the Tracker Academy, who goes out of his way to track certain individuals and further our knowledge of aardvark ecology.

So there you have it, the Funny Five: giraffe, warthog, wildebeest, monkey and aardvark. Do you agree with our new nickname? Think we’ve forgotten any particularly funny beasts? Let us know in the comments and use the hashtag #FunnyFive