The volunteer programme at Samara, which started in 2010, has succeeded in rehabilitating much of the 27 000 hectares of land. However equally as important as the work they have been doing with restoring the environment, is the relationship the Volunteers have built with the local community 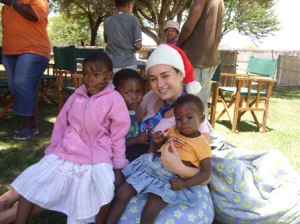 One such community project is Vuyani Safe Haven in Graaff Reinet. Vuyani is a home for children who have been abused or neglected. They currently house 40 children, ranging from a few weeks old to 18 years. Samara recognized the importance of such a home in the local community – a family that will open its heart to any child in need and where children can turn to and receive food, a bed and love.
The volunteers at Samara have a two-fold plan to assist Vuyani in providing for the children:
1. spread the word about Vuyani to raise money
2. bring the children to Samara for educational days where the children have the opportunity to learn about the environment in a fun and interactive way.
This year through the ‘Friends of Samara’, the Volunteers have managed to send all the Vuyani children to school. It only costs $100 to send a child to school, an insignificant amount for many people, but a huge obstacle for Vuyani with 40 children and no money. Above and beyond this, many volunteers and Samara guests have donated clothes, books, stationary and nappies, even sending parcels from overseas! Manager of the Volunteer Programme at Samara, Hayley Clements, comments  “We had an overwhelming response to our fundraiser to purchase each child a personalized present at Christmas. Samara also nominated Vuyani to the National Airways Corporation’s Annual fundraiser, where R140 000 in pledges were raised!” 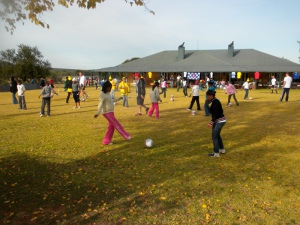 Besides the very important monetary support, Samara has identified the need to educate children about the environment, allowing them to understand the rewards of spending time in nature and thus the need to conserve it. The Vuyani children come to Samara once every two months, interact with volunteers on treasure hunts, soccer matches, game drives and walks. After one such day, the manager of Vuyani wrote: “I pray that everything that people like the volunteers do to show their love and compassion will reach the children and make a difference.  In some way erase all the bad things that made them feel worthless and fill their hearts with memories and faces of people who showed compassion and make them feel precious and loved”
“We have been blessed to meet the Vuyani children, and continue to learn so much from them,” concludes Hayley.