By Samara on November 24, 2016
A few months ago we announced that we were relocating Sibella's last male offspring, Pepper, in order to bring new bloodlines into Samara's cheetah population.

We did not want him to mate with Chilli, his sister, as this could lead to genetic defects in their offspring. We received our new male cheetah in September, and we have eagerly been awaiting his introductory meeting with Chilli. When it finally happened, Samara guide Jannie Dunn was there to report. 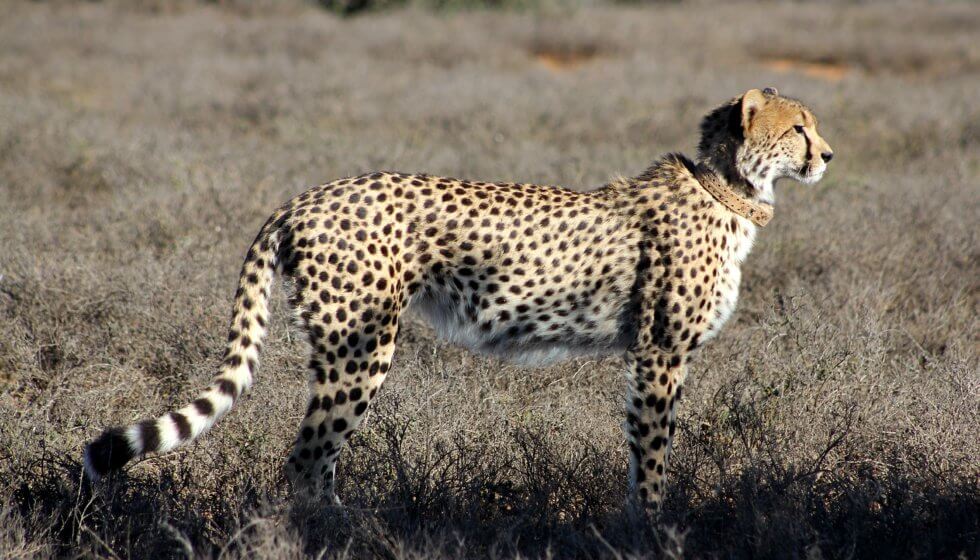 Even though it was still fresh early in the morning, the sun already beat down, and I secretly started hoping that it wouldn’t be too long of a walk. Heat usually meant the cat would settle down nicely, and the signal was strong so everything seemed promising. Yet, I could not help getting flashbacks of a walk I had had in the exact same area four months previously:

We had a visiting group of Australian bikers. Since they were only with us for one night we tried to maximize their experience and I had stopped for a rhino. Efficiency was the operative word: get in, get out, get on! It was bitterly cold and since you can only pack so much luggage on a motorcycle, I was walking with eight men and women dressed in the warmest clothes they had: riding boots, leathers, padded jackets and bandanas. One of the guys even got on the open game viewer with his helmet on. Classic. So here am I following a white rhino in the middle of the Karoo with the lost crew from a Mad Max set plodding behind me. After about 400m I found the place where the rhino had been sleeping moments ago – on cue – and I put on my confident ‘told-you-so’ smile as we continued. It happened to be the last time I had the luxury of a confident smile that morning! 400 metres became 800 metres, and 800 became… who would ever know. 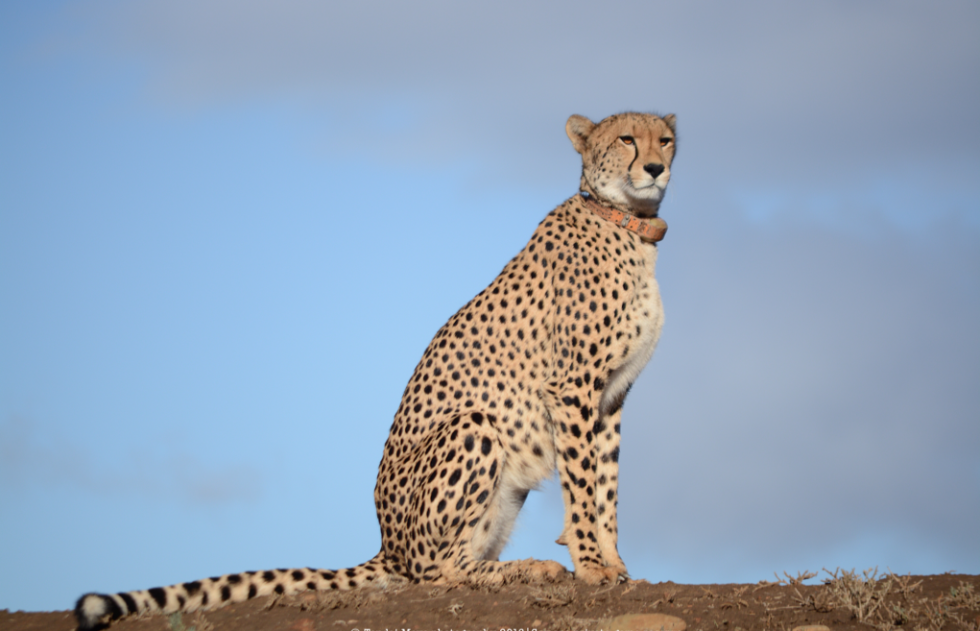 It was me and a bunch of panting, blundering, sweating bikers. Jackets started flying and the main subject of conversation became something about appropriate footwear. As a guide there are times where you must pretend not to notice and I deafly soldiered on after the dumb-witted nose-horn. Well, correction: he was witted enough to stay ahead – just beyond our sight. We hit a first parallel road, then a second – long story short: the few that still had the strength or desire to lift their eyes saw a grey-ish rock trotting over the horizon with his tail in the air. Six-Love. I sat them down at the nearest road and jogged back to get the Cruiser!

But this is a new day. New quarry. New hope. In this land you live by hope …often.

After 10-15 minutes of walking we got to the first parallel road and the strong radio transmitter signal ground our pace down to a crawl – slowly edging our way forward so as not to startle the cat. I first saw the half-yellow obscured in the shadow of a Kruisbessie. We slowly moved around to get under the sun and at that moment I confusedly realised “this is not Chilli”. I saw the half flash of a white-tipped tail swishing deep inside a Kunibos: we had stumbled onto the first meeting of our Samara-born female cheetah Chilli and Shadow, the newest addition to Samara’s spotted speedsters. 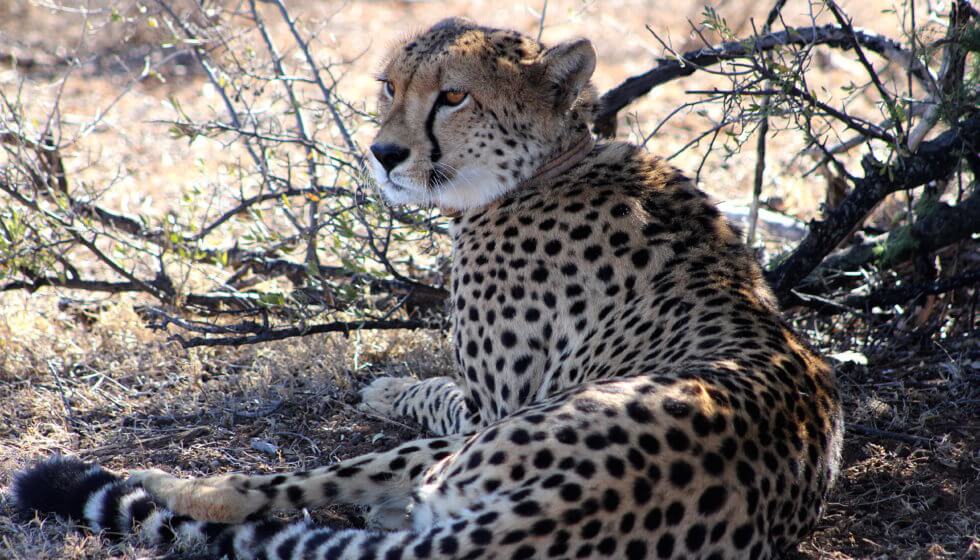 The young male was oblivious to us as we settled down at a respectful distance. He only had eyes for the Kunibos and its perplexing content. “Good luck” I thought, “welcome to the real world boytjie”. It’s boy-meets-girl, but girl has claws and teeth and is in NO mood for boy!!

After getting up and slowly circling the thick shrub, Shadow settled at the safest entrance, to the rear of Chilli and just beyond her reach. As any man can attest, the sounds that came from inside the bush were not difficult to translate and definitely not welcoming. But, ah the beauty of that invisible gravitational pull. For the next 30 minutes we watched him inch into the Kunibos and occasionally reverse out abrubtly. At one of these instances he decided to stay outside and settled down. Unfortunately the sun was hot and the breakfast-call incessant. We left the two to their tango and headed off. What a morning.

Time will tell if it’s a case of hard-to-get or never-to-get. As the saying goes: Watch this space! 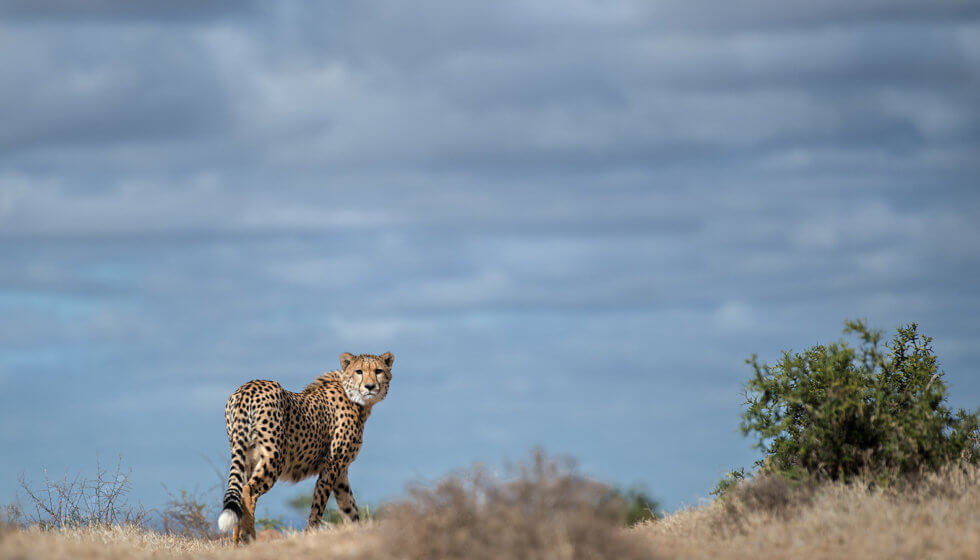