South Africa ranks as one of the top birding destinations in the world. A 1997 study showed 20,000 tourists had spent approximately $26 million on bird safaris in South Africa alone. The Avitourism industry has grown rapidly in the last two decades. Birdlife South Africa has a membership of over 8000 dedicated members. Modern day ornithologists study bird behaviour intensively, including their common calls, migratory routes, nesting and physiology. But it is their language we still don’t fully understand..

For centuries birds’ alarm calls have been a vital source of information for indigenous trackers as they hunted and gathered food in the bush. A bird will make a different call if it encounters potential threat, such as a leopard, eagle, snake or human. This is called an alarm or distress call. The purpose of the call is to alert other birds of the threat as well as to indicate to the predator that the surprise element is gone. Essentially it’s saying, “don’t try, I see you!” What is interesting is that the majority of these calls are not recorded or published in any scientific research paper, according to Professor Derek Engelbrecht of the University of Limpopo.

Over the past 17 years working with expert trackers, I have always been fascinated by the accuracy and extent of his knowledge of bird calls, particularly the alarm calls, whilst following animal trails on foot. With the aim of understanding bird language better, Tracker Academy has joined forces with Professor Engelbrecht to formally record bird alarm calls. Last week we spent five days following predators in the effort to record any bird which alarmed at these predators. By no means is the project over, we still need to record many examples of different bird species alarming at different predators in different contexts. But it’s a start, and we are very excited to see the results. If we can teach our students to understand the alarm calls, it will give them something extra in their bag of tracking skills.
Trackers don’t always see the animal tracks on the ground, but because they understand bird language they are able to predict where the animal is moving. 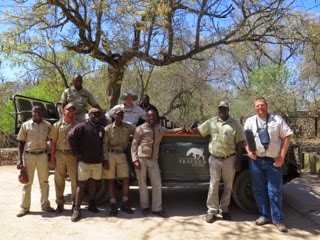