Are the elephant bulls meeting the herd in secret?

By Samara on January 12, 2019
Ever since Kahle trumpeted his arrival onto Samara back in November 2018, we have waited in anticipation for the moment that the founder herd would meet up with one or other of the bulls. By tracking the sub-matriarch and Kahle's movements via their satellite collars, we have come to believe that they may be meeting up in secret.

In the two months since the elephant bulls Kahle and Mvula DD were introduced onto Samara, they have explored different parts of the reserve, mostly along the eastern section. At first, they headed in different directions, but after about a week they met up and have been inseparable ever since, apart from the occasional solo foray.

They seem to have established a preferred area – the Bouwershoek section at the foot of Mark’s Pass. They spent the majority of their time in the thickets on the valley floor, munching their way through large Cabbage trees (Cussonia spicata) and Jacket plums (Pappea capensis). On most days around midday they make their way to Bouwershoek Dam for a drink and a mud bath. 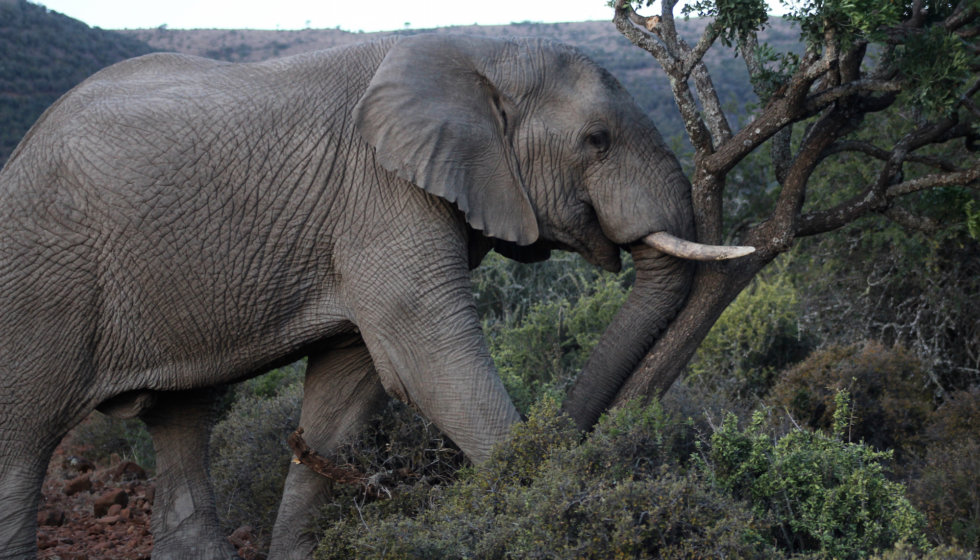 Each bull has a different technique for bathing – Kahle takes the prime spot by the water inlet pipe and coats himself in mud quickly and efficiently. Mvula DD, on the other hand, is less adept at mud baths. He stands in a more difficult spot on the dam wall amongst the trees and makes big splashes, throwing mud onto his back with his trunk, but ending up with more mud in his eyes than anywhere else, which he then rubs off with the back of his trunk. Penny Pistorius, the elephant monitor from ERP, has noticed that Mvula DD has started sneaking off to the dam before Kahle in order to get the prime spot at the water inlet for a few minutes before the older bull arrives.

In recent weeks, the herd of females has also been spending more time in the Bouwershoek area, having spent the last few months of 2018 on the thickly wooded slopes below Eagle Rock and on the western slopes of the Kondoa Mountains. Since 3rd January, they have not budged from the Bouwershoek section of the reserve. They spend their days foraging on the mountain slopes before emerging for a drink at the dam around dusk.

We first got an inkling that the herd and one or both of the bulls had met up when we looked at the readings of the GPS locations of the sub-matriarch and Kahle (you can read more about this tracking technique here). In mid-December, 1 month after the bulls’ release, the satellite collar downloads of both Kahle and the sub-matriarch indicated that they spent the evening in the same vicinity. Although it was impossible to accurately confirm whether or not they had met, elephants are able to communicate over several kilometres using very low frequency sounds inaudible to the human ear, so it seems likely that they have at least been aware of each other for a long time.

After this theoretical encounter, the herd started spending more time east of Mark’s Pass towards Bouwershoek Dam, using this dam as their nightly drinks stop of choice. Since this area forms part of the two bulls’ habitual turf, the team believes that the likelihood of them having met is very high. However this has not yet been corroborated with a daytime sighting, and it seems that they are linking up at night. This is likely due to the herd’s movements more than anything else. They tend to be more mobile at dusk and at night when it is cooler.

Although male and female elephants are typically described as leading separate lives and coming together only to mate, the reality is slightly more complex. Mature bulls do not lead entirely solitary lives and require company, often in the form of other, younger bulls. This is exemplified by the apparent bond between Kahle and Mvula DD, who have an age gap of approximately 10 years. As inherently social creatures, elephants have an ingrained need to communicate and mingle with other elephants, be they herds or individuals. So, in answer to our question posed at the very start, it seems very likely that they have met one another. What remains unanswered is whether both bulls were involved in the encounters or whether Kahle prevented Mvula DD from engaging with the herd. Since the latter is not collared we can only glean his nighttime activity from his tracks, Kahle’s movements and their ongoing relationship and body language.

As the first functional - that is to say breeding - elephant population in the Plains of Camdeboo in almost 200 years, we are very excited at the thought of these interactions. We hope to see them together in daylight, and will post images when we do.

Samara Private Game Reserve is a luxury Big Five safari destination with a difference. Guests are invited behind the scenes of a passionate conservation journey to restore a unique South African wilderness. This genuine conservation participation, combined with heartfelt Karoo hospitality and breathtaking landscapes, offers a safari that feeds the soul.